How Business Leaders Are Approaching the Ukraine Conflict 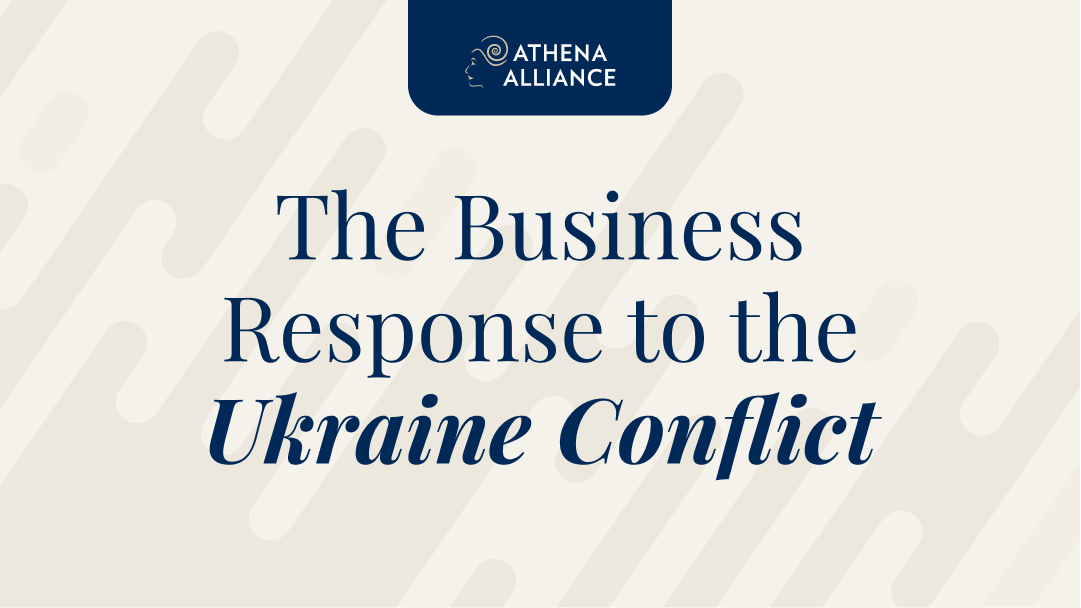 
Recently, Athena Alliance hosted a Salon on the Ukraine conflict—examining the past and present roots of the conflict, its impact on international businesses, and what each of us can do to create a positive impact. This Salon was hosted by Andrea Bonime-Blanc, an Athena Coach and category steward for ESGT. Andrea invited special guest Natalie Jaresko, former Ministry of Finance for Ukraine, to share her unique perspective.

Natalie’s parents were refugees from World War II. She grew up with enormous gratitude for life in America, with a deep desire to give back. She studied accounting and political science, eventually attending the Kennedy School of Government Planning, where she studied public policy. She started her career with the US State Department and then moved into social impact investing. She eventually grew her own firm until about 2014, when Russia illegally invaded Crimea. That’s when the banking system started to collapse. Natalie left Ukraine in 2016.

Below, read our key takeaways from the event, including the roots of the Ukraine conflict and how international democracies and governments contributed to the current situation on the ground. We’ll share Natalie’s insights on the impact of the Ukraine conflict on the international business community, and what leaders can do today as individuals to make a positive impact. View the full recording of the Salon here.

How did we get here, to this time of conflict in Ukraine? Natalie offered her analysis.

“One [reason] is that we bought into a philosophy—that globalization, that trade and sharing markets would democratize. And if we traded enough with Russia, with China, with other autocracies, they would become more like us. They would begin to want to live in our rules-based system,” she explained. But, she said, “that just isn’t true….They’ve used our grid to integrate themselves, to take the benefits of capitalism without the benefits and responsibility of democracy. And partly that is our own fault.”

Natalie points out that our lack of systems, governance, and transparency has all led to a global environment that favored oligarch money. Although we know that much of that money is earned illegally, we (the US and other countries) have also benefited from it. There’s now a haziness as to who is financing what. Couple that with their use of social media and their ability to create dissent throughout our society, and mass interference arises.

“But the second big reason [we are] where we are today is because we didn’t take a stand earlier. Putin announced his intentions over a decade ago at the Munich Security Conference,” Natalie explained. “[Putin] said that the worst thing that had happened in the century was the fall of the Soviet Union. He said he despised the liberal world order that we all enjoy and live in. He said he would bring it down.”

Natalie pointed out several things she believes can make a direct impact on the Ukraine conflict. One is sanctions against oligarchs. This must have some effect on Putin’s decision-making – a “very cost-efficient way to have an effect”, as Natalie explained.

The impact on international businesses

What can businesses do to make a statement, to have an influence? They are not selling weapons; they cannot fight with a gun.

Natalie reflects: “I thought back to the South Africa apartheid divestment effort and how strong that was. As a statement on the part of business and on the part of us as consumers and investors, that we don’t want to be part of something that grotesque, that criminal, apartheid, or in this case, what was about to happen in Ukraine.”

Natalie pointed out that we cannot feign ignorance: “With social media and with satellite pictures, we know everything immediately. So we don’t have an excuse to say, ‘Let’s see what happens in a couple of months.’”

What can we do as individuals?

Athena members gain access to weekly live and on-demand Salons in which we discuss the latest business trends, lessons, and societal events. Not a member of Athena? Learn more about joining our incredible community of top women leaders.

Andrea Bonime-Blanc, JD/PhD, is Founder/CEO of GEC Risk Advisory, a strategic governance, risk, ESG, ethics and cyber advisor to business, NGOs, and government. A former senior global executive at Bertelsmann, Verint, and PSEG, she serves on several boards and advisory boards (including Crisp, WireX, the Cyber Future Foundation & NACD New Jersey Chapter), is Independent Ethics Advisor to the Financial Oversight and Management Board for Puerto Rico, and a life member of the Council on Foreign Relations. She is the recipient of a NACD Directorship 100 Recognition in 2022, an NACD Governance Leadership Fellow, and holds the NACD Carnegie Mellon Cyber Oversight Certificate. She has authored many articles and several books, most recently Gloom to Boom: How Leaders Transform Risk into Resilience and Value (Routledge 2020) and the annual e-book The ESGT Megatrends Manual 2022-2023 (Diplomatic Courier 2022).

Natalie Jaresko served as Minister of Finance for Ukraine from 2014 to 2016. Currently, she sits on the Puerto Rico Oversight Board. Her career has taken her to the intersection of international service, the public sector, and private industry. She has more than 25 years of management, strategy, negotiation, and public policy experience. She began her career working for the US State Department and later worked at the US Embassy in Ukraine in the early ‘90s. She was there to see the transformation that took place across Eastern Europe and the former Soviet Union, and since, she’s worked on a range of exciting initiatives for the US government.