Taking a stand as a company: Perspectives from Levi-Strauss CHRO Tracy Layney

It’s no longer possible for companies to sit on the sidelines. When it comes to issues like climate change or gun control, even staying silent sends a message. Read five lessons on how to create an action plan to identify your company's stance and advocate for it effectively. 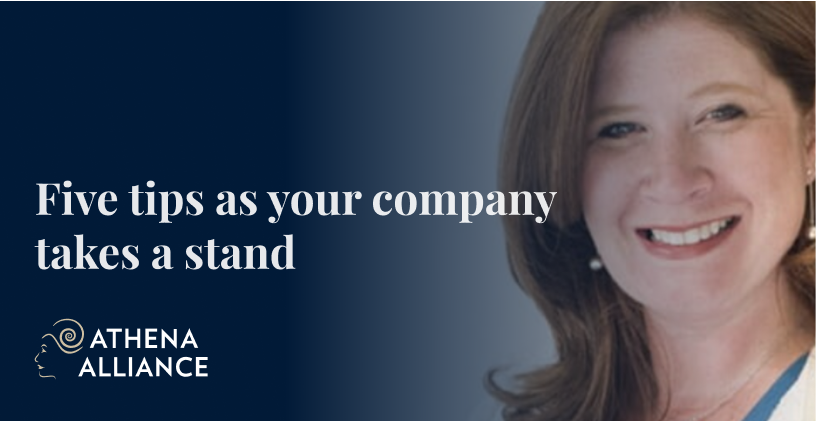 Athena Alliance recently gathered a group of CHROs, heads of learning & development, and Athena members for our monthly CHRO Perspectives to discuss how modern companies can take a stand on the issues facing society. As Levi-Strauss & Co. CHRO Tracy Layney shared, it’s no longer possible for companies to sit on the sidelines. When it comes to issues like climate change or gun control, even staying silent sends a message.

In the discussion, Tracy shared why Levi-Strauss has been an outspoken, value-driven company from the start; how to ensure your stance is institutionalized rather than just being an opinion of the CEO; and how to create an action plan to identify the issues you need to speak up about as a company and do so effectively.

Levi-Strauss: A value-driven enterprise from the start

When Tracy joined Levi-Strauss as CHRO in March 2020, the company already had a long history of taking a stand on important topics. Founded in 1853, the company has been outspoken on issues ranging from racial justice to LGBTQ rights to gun violence prevention. They desegregated their factories long before the Civil Rights Act, and were early supports of LGBTQ rights as early as the late ‘80s.

More recently, in 2016, Levi-Strauss’ CEO spoke out in favor of gun control after a gun-related incident in one of their stores. He posted an open letter advocating for immediate action, and followed it up with years of advocacy. As Tracy explained, this was a no-brainer for the company.

“We’ve taken a stance that is very much aligned with the entire US population,” she said during the event. “The vast majority of Americans, 84%, believe in common-sense gun laws like background checks, including 70% of Republicans… and 58% of Americans are going to be impacted by gun violence in their lifetimes.”

Five tips to remember as your company takes a stand

As a next step, Tracy recommends sitting down for an intentional conversation with your leadership team. What are the things that are happening in society that are actually fundamental to your business and its success? How does that issue affect you and your constituents, and how can you affect it? Then, what should you do about it?