Nithya Ruff is a strategic open source, digital, and media technology executive with 20+ years of experience leading tech and innovation. Read how sponsors helped her become the first woman fellow at Comcast, and her insights on how leaders create more inclusive organizations. 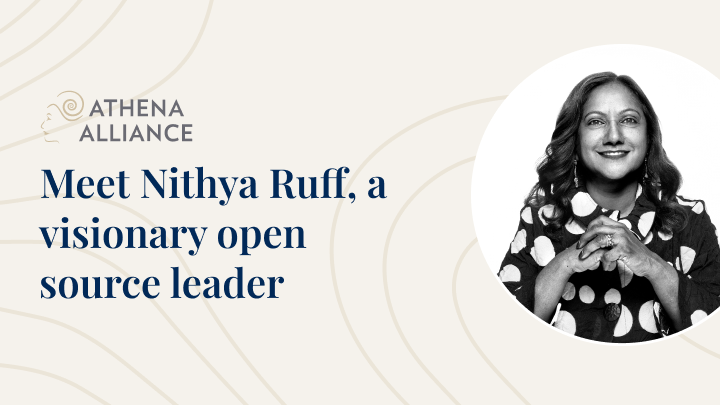 
Nithya Ruff is a strategic open source, digital, and media technology executive with 20+ years of experience leading tech and innovation at companies like Comcast, Intel, and SanDisk. She was recently honored as one of ten fellows at Comcast, where she established a center of excellence for open source. She currently serves as chair of the Linux Foundation board of directors, where she brings the perspective of the open source community to champion diversity and inclusion in technology.

Below, read more about Nithya’s executive journey, how sponsors helped her become the first woman fellow at Comcast, and practical actions leaders can take to create more inclusive organizations.

Give us an overview of your executive journey so far.

In the second decade, I built my skillsets in product management, product marketing, and strategy. I managed a ton of products from infrastructure to networking to security. I also started getting involved in open source technologies, which were just beginning to blossom. I worked in various sizes of companies from 25 people to 15,000 people. Seeing how these skillsets translated across companies built my sense of agility, sense of urgency, and knowing how to be flexible across different company stages.

The third decade was the most amazing. I started new functions like open source in SanDisk. I started a new office at Comcast, working across a very large company creating change, accelerating digital innovation, and creating a software & developer mindset. This was also the same era where I was invited to join boards—a very influential nonprofit board called the Linux Foundation. I also became an advisor and visiting scholar at UC Santa Cruz,  an advisor at the Rochester Institute of Technology, and immerse myself in creating a board journey.

Joining Athena and being part of various board education groups has uplifted my thinking as an operator. Thinking like a board member elevates your thinking, your networking, your sense of how the company functions. I’ve become a much more valuable executive because of my board journey. Whether I achieve a seat is not the end journey; I’ve become a better thinker by collaborating with the incredible women in these organizations. This has been a golden age. I finally have the confidence to pursue what I want without limits.

Tell us about becoming the first woman fellow at Comcast.

Generally, there are two career paths for engineering leaders. One is to be a Head of Engineering for a product line or service or infrastructure. Typically that involves large-scale people management, budgets, production deadlines, etc.

The other path is as an individual contributor or to run a small team. That’s more of a technical thought leadership path where you’re seen as an expert in a certain area. You’re responsible for increasing knowledge and awareness throughout the organization. This looks at three questions: are you making a business impact? Are you a recognized thought leader inside and outside the company on a certain topic? Are you a leader, mentoring people and growing leaders around you?

There had never been a woman in the fellowship position before. It had also been a path where very technical engineering-type people had succeeded—people who had filed patents, people in deep engineering roles. I was this interesting person who was an evangelist, a culture changer, a technical thought leader, a collaborator of a different kind, and a woman of color.

So I became one of ten fellows in the company. I give so much credit to my company because they recognized me as a thought leader making a huge impact on the company’s bottom line. I’ve now started a mentorship program for other distinguished engineers to create a pipeline for them to move into fellowships and other roles.

What role did sponsors and advocates play in your development?

I didn’t know I would even qualify for the fellow path, because I always viewed it as being deeply about engineering. I continued pursuing the head of engineering path, even knowing my heart wasn’t in it. I didn’t want to get involved in people and budget management on that scale and take my time away from thought leadership and strategy. I do 20-30 speaking engagements per year, and I thought that would take me away from the work I loved.

I talked to a VP of engineering who’s a mentor to me. She suggested applying for the fellowship. I went and talked to some members of the fellowship approval committee, and they said it made sense. I was already behaving like a fellow. It built momentum. I told my boss, who gave me their full support. As I was putting together my application, so many sponsors came out of the woodwork. I was supposed to have 3-4 sponsor letters, and I had 15. It was so shocking to approach someone and ask if they would support me, and they’d say “Absolutely, how can I send the letter?” You often have to wait until you die for people to talk well about you, but I suddenly saw how people perceive me and the value I bring.

What is the unique value you bring as a leader?

I help companies transform and find a bigger purpose. I participate in global collaboration to solve common problems. One of the beauties of open source is it allows you to focus on what you uniquely bring to the table while working with others on problems you all face. Collaborating in new ways to solve problems, transform cultures, work outside the boundaries of the company, and innovate openly are things I bring to any industry or company.

A common thread throughout your career is being a champion for diversity in technology. What practical actions can leaders take to promote diversity on their teams?

Being a woman in tech, you’re acutely aware of your place and the journey you went through to get there. For me, part of giving back is making it easier for someone else to grow in technology. Hiring diverse people is extremely important—we all know that. But what we sometimes fail to do is build an inclusive culture that welcomes them, gives them a sense of belonging, values them, nurtures them, and supports them to continue to succeed.

As a leader, you need to get intentional in your day-to-day activities—from giving people a chance to be heard in meetings to giving people an opportunity to sign up for stretch assignments. Sponsor them for opportunities. Provide them with insights into how to navigate the organization as a minority. Match them with mentors and sponsors. You have to take a lot of actions to make sure your diversity is heard, included, and feels a sense of belonging in your organization.

What brought you to Athena? How has your membership helped in your executive and board journey?

I was a member of the Linux Foundation board. It’s a 501c6 board, so all the people sitting on the board are senior technical leaders from companies like Google, Facebook, AT&T, and Cisco. I was appointed to the board to bring a different perspective, but I knew very little about how boards operated, what my role would be, how to shift from being an operator to a board member, what questions I could ask, the role of the executive team vs. the board members. Lisbeth McNabb was CFO of the Linux Foundation at the time, and she said “You should join Athena, you’ll learn a lot more about how boards function and what your role is.” I asked the Linux Foundation if they would sponsor my membership, and they said “Absolutely yes.” So for the last 3-4 years, the Linux Foundation has been instrumental in supporting my journey at Athena.

What advice do you have for rising women leaders?

Self-knowledge and being your own best advocate are paramount. It starts with knowing yourself, what makes you happy, how you behave under stress, what kind of environment you succeed in, what people you want to surround yourself with. Your strengths, your weaknesses, etc. From self-knowledge comes self-advocacy—being in the driver’s seat of your life and not abdicating it.

Members who wish to connect with Nithya can do so by clicking “Request to Connect” on her Athena profile.

From executive branding and networking to recruiters and investors, the following are five…

Understanding boardroom fundamentals as a new board director

Before you join a board, it’s important to understand core concepts like what…

Board Meeting Etiquette: What to Expect and How to Prepare

Once you achieve a board seat, the next challenge you will face is…