When Your Career Ends, But You’re Not Done Yet: Introducing the Third Act Podcast Hosted by Liz Tinkham

This is the "anti-retirement generation" – those who don’t want to stop, so they don’t. They reach their career end points and, well, they just keep going. Liz Tinkham is the face of this new generation. 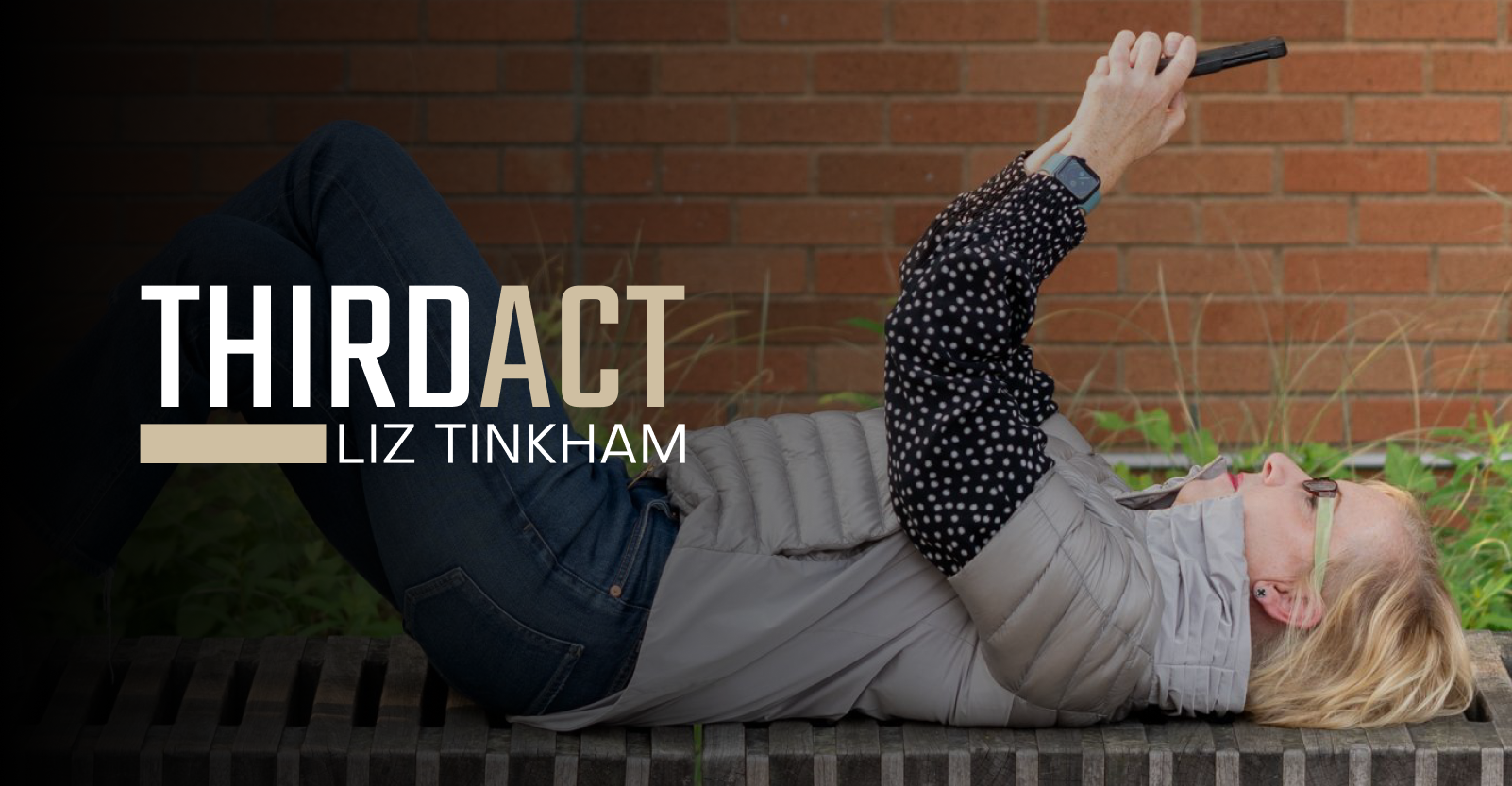 Once upon a time, the idea of retirement called to mind images of a quiet golf course, a room full of crafts, or answering phones at your local senior center. But for women who rose to the top ranks of leadership in the ‘80s, ‘90s, and ‘00s – working exhausting hours and perhaps raising kids and traveling the globe – this view of retirement feels less than inviting. After all, these women made it to the top. They conquered the workforce. They defied gender stereotypes. And they didn’t do it to spend some of their most productive years playing golf all day or stuffing envelopes.

They’re not done yet.

That’s right. Meet the modern wave of women career leaders who are retirees or just about to be. They’re financially comfortable. They’ve sated their “big job” career interests, checked all the boxes. They got the As in school, got the job(s), raised the kids, and managed a big career. They’ve achieved the title and the accolades to go with it.  But they’re not done. If anything, this is the anti-retirement generation – those who don’t want to stop, so they don’t. They reach their career endpoints and, well, they just keep going.

Liz Tinkham is the face of this new generation. She calls this time in her life her “Third Act”, and she explores this concept on her podcast, The Third Act, where she learns how other people are spending these similar years – reinvigorating, reinventing, and reimagining, for all of us, what it means to keep going long after the last paycheck has been deposited.

Tell us about your career at Accenture.

I graduated with a degree in aerospace engineering thinking I would design rocket engines, but (long story), ended up working for what was then Arthur Andersen’s Management Information Consulting. I started the Monday after I graduated and left 33 years later! When I started, there were 5,000 people at the privately-held accounting firm that was Arthur Andersen; when I left, it was publicly held Accenture, with more than 450,000 globally. I was lucky to be part of the incredible growth of Accenture. The opportunity to grow and to expand as a leader was mine for the taking. I rode the consulting wave, focused on the telecommunications and high-tech industries, working with clients such as AT&T, Reliance (India), Cisco, Microsoft, and so many others, all around the world.

You’ve been a member of Athena for a long time. How has it evolved for you?

I’ve been a member of Athena since its earliest days. I believe in Athena’s mission. It’s a 360-degree service that helps women achieve their professional goals by providing the tools and opportunities they need to better themselves.  I’ve benefited from coaching, access to speaking engagements, and, of course, many board opportunities including my board, Particle.io which came to me through Athena. I am so impressed with Athena’s commitment to its mission and the constant push to improve services to meet women where they are. It’s reflected in everything Athena does.

Who are you speaking to in the Third Act Podcast?

I was a part of a generation that grew up in the late 70s and 80s. We were told we could do anything. “Take any job you want”, “Get straight As”, “Get on that management track”. So, we did!  And many of us kept going because we were already wired to do well and the opportunities for women were finally getting better. So, we kept rising. We managed to juggle careers and families. Many of us never jumped companies nor did we zig-zag through our careers. Maybe that’s because we were fearful that we were going to fall off the track and that we could not get back on, or that we could not make enough money. Whatever the reason, the result is that there is now a generation of women (and, of course, men) who are mostly financially set and who are going into their retirement years – their vocational freedom years — with the time, treasure, and talent to do whatever they want.

I thought this because I never slowed down until the day I retired. I never spent time thinking about what I wanted to do. But when I did retire, instead of falling, I crossed that line standing up. And, I have the momentum and energy to just keep going.

You’re speaking to both men and women about their passions later in life. What are some themes you’re seeing?

The stories are incredible, ranging from starting family foundations to founding a global charity to going into clergy! Interestingly, there’s always a through-line of what the person would end up doing throughout their life. Maybe it’s a passion they barely nurtured or put aside when they were working or kept inside themselves for all the years. But it finally shines through in their Third Act.

It’s fascinating to connect the dots between the first act (school), the second act (career), and the Third Act. One woman, I call the Challenger. She took the hardest classes at a  hard school, majored in the hardest degree, took on the toughest discipline at her company. She only looked for the hardest things to do. In her third act, she’s now finding more time for herself but also nurturing her need for challenge by advising CEOs who are in tough situations. (And also doing some really tough hiking!) Her challenger through line was always there.

The passion is there for each of my guests. It’s always been there. What’s fun to explore is their ability now, in their third act, to use their time, talent, and treasure to actually make it happen.

Part of your own Third Act is board service. Did you ever think you’d serve on a board?

I never thought about it before joining Athena. I realized I was in the advice business as a consultant, so perhaps I can be a good board member. It’s a great way to take the wisdom I gained through my 35 years working and to give back. I find both my for-profit and nonprofit board work to be interesting and fun. Both have very different challenges than what I did at Accenture. I hope to continue with more years of board work.

What else is in your Third Act?

Well, I kind of created this podcast to figure out what my own Third Act can be – perhaps it’s this podcast! I’ve always enjoyed interviewing people and I think I’m pretty good at it, but we’ll see what my audience thinks. I’ve adopted a couple of hobbies – piano and golf – which are both quite hard to learn later in life. I also teach a graduate and undergraduate class at the University of Washington. I love being around students, they are so different from the student I was. Most importantly, my family now truly comes first.

You often use the term “time, talent, and treasure” to describe the Third Act. Tell me why.

Those three words define what I’ve now been gifted with: time to do whatever I want, talent to take on whatever I want, and treasure to not have to worry about my next paycheck. I feel a strong obligation to use these gifts wisely every day because I recognize that so many people aren’t, and never will be, as fortunate. One of our Athena members, Manisha Thakor, recently did a Virtual Salon where she used the term ‘vocational freedom’ to describe something similar. We decided to banish the word ‘retirement’ from our vocabularies because of its connotations. We are both set on continuing the push, but only in the areas we truly love.

What do you think this holds for the next generation of retirees?

It will be interesting to see how things evolve. When I retired, I read a bunch of books on retirement. Every single one was targeted at a man. One book had a chapter called something like “don’t divorce your wife” (i.e., even if you can now get someone younger).  Seriously. If they had any mention of women, the message was along the lines of, “You better get your financial act together,” or it was “What are you going to do with your husband now that he’s home?” I thought to myself, my generation of women is missing from the conversation.

Who do you want to speak to for your podcast?

I’m looking for people who are at that vocational freedom point. They no longer need that big career job. They have a passion and they’ve funneled it into doing something interesting with it in their Third Act.

If so, Liz wants to hear about it. Email her at [email protected] with your tips. Connect with Liz on LinkedIn or on Twitter.

Right now, in boardrooms everywhere, the conversation is starting to shift.

In late June last year, I made a promise. I committed Athena to…

Telling Your Story through Your Board Bio

Ask Athena: Am I too old to serve on a board?