“You’re not going to get a public company board seat as your first board. Stop looking, it’s not going to happen!” For three years, Barbara Troupin heard this feedback again and again. After interviewing for 20+ boards and receiving as many rejections, Barbara’s patience and persistence paid off. 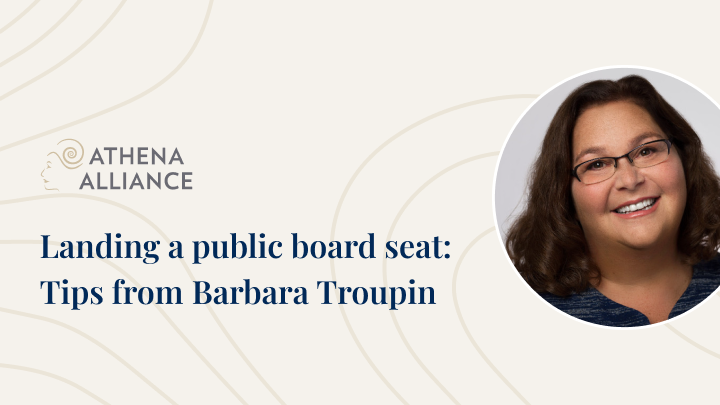 “You’re not going to get a public company board seat as your first board. Stop looking, it’s not going to happen!”

For three years, Barbara Troupin heard this feedback again and again. Last month, after interviewing for 20+ boards and receiving as many rejections, Barbara’s patience and persistence paid off as she was appointed as an independent director for Equillium, a Nasdaq-listed clinical-stage biotech company.

Barbara is a serial Chief Medical Officer who helps biotech companies scale from startup through commercialization. She is a seasoned executive and board advisor in the areas of biotech, pharma, and life sciences. In 2018, she was propelled on her board journey by two combining forces: working as an operating executive with the exceptional board at Aquinox Pharmaceuticals, and the company’s subsequent phase three failure that left her without a job.

She joined Athena in September 2018, setting her sights on networking towards her first board role at the industry’s premier investor event the following January. She worked with Athena to develop her board pitch, board application materials (what we call the Branded Career Portfolio), and networking strategy.

How networking brought her first public board seat to fruition

Barbara continued interviewing for board and executive roles, stewarded her network, and stayed close with recruiters and industry titans. But despite checking all the right boxes, she still faced rejection.

“On three occasions, when I got to the point of interviewing with the full board, they would say ‘We don’t know anyone who knows you, you’re not part of the circle,’” Barbara recalls. “To me, that was incredibly frustrating.”

After every interview, whether with a CEO or recruiter, she would mention her intention to seek a board role in tandem with an executive role. She landed her executive role, but the board role was still elusive.

“It was part of my interview script,” Barbara said. Finally, her long-term commitment to networking paid off. “I was interviewing for an executive role with the company’s chairman, who is a well-known, well-respected biotech CEO. He sits on the Nom/Gov Committee for Equillium, and introduced me to the company. It even turned out that I knew their executive chairman. The investor on the board used to be a research analyst in life sciences covering companies I worked with. Those connections were incredibly helpful in building trust.”

Her name was put forward and she interviewed with the board, investors, and CEO. But without that initial connection with the Nom/Gov chair, and his direct support and endorsement, she doesn’t believe she would have been considered a top candidate.

“How do you find the people who will make those introductions at the right time?” Barbara reflected. “There’s some fairy dust that goes into that.”

The fairy dust: Lessons learned in the search for a public board seat

Athena helps women leaders reach the next step of their careers. Are you ready to step into the boardroom or C-suite? Athena can help you get there.