Athena welcomes Michele Bettencourt to its board of directors

Michele Bettencourt (“MB”) is a public company CEO and board director who has scaled revenues from $25M to $300M, pressed the closing buzzer at the NASDAQ four times, and closed the NYSE. She brings four decades of go-to-market, sales and revenue, and operations expertise to Athena’s board. 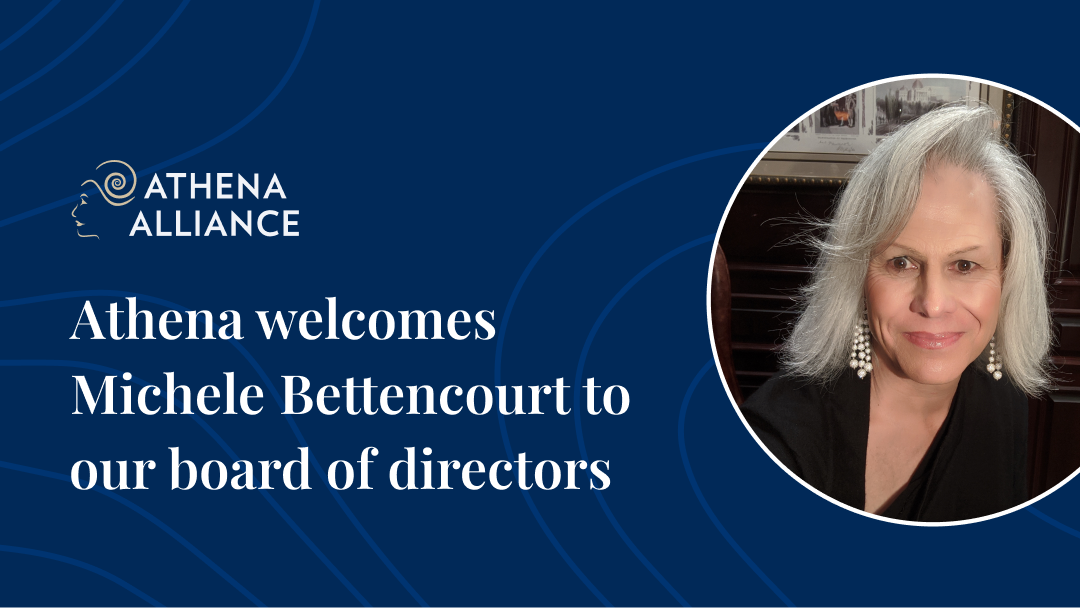 Michele Bettencourt (“MB”) is a public company CEO and board director who has scaled revenues from $25M to $300M, pressed the closing buzzer at the NASDAQ four times, and closed the NYSE. She brings four decades of go-to-market, sales and revenue, and operations expertise to Athena’s board.

“I am so thrilled to welcome Michele to our board. I am energized by Michele’s confidence, her presence, and her willingness to be who she is,” Athena Founder & CEO Coco Brown said. “She’s an incredible source of business wisdom. Michele has built large companies, sold them to even larger companies, acquired companies, taken companies public, flown on the jets of the Silicon Valley elites in investing and entrepreneurship, and experienced all the incredible ups and downs one expects as CEO. Who better to join our intimate, powerhouse board at a time when we are on the verge of incredible growth? I feel so lucky.”

Michele joins Athena’s board alongside business mavens Liz Tinkham and Rhonda Mims. She also serves on the boards of Corelight (where she is executive chairperson), WalkMe, and Ada.

“I am thrilled to have MB join the Athena Board of Directors,” Liz said. “Her extensive business background combined with her intellect and energy will be a great asset to us as we grow. Personally, MB has been a terrific coach and mentor on my board journey. She knows what it takes for women to advance to the most senior C-suite and board positions because she’s been on both sides of the table.”

Below, learn more about Michele’s nontraditional journey as a transwoman in business and why she believes in the power of Athena to transform women’s career trajectories.

From AB to MB: a nontraditional board journey

Anthony Bettencourt (“AB”, Michele’s birth name) dropped out of college to pursue sales work in Silicon Valley. In 12 years, she went from not knowing a single person in the Valley to leading companies through IPO and $4B market cap growth.

“Silicon Valley was a very different place in 1982. There were curious minds and a decent work ethic,” Michele reflected. “I had both in spades.”

AB moved up the ranks quickly, from a sales representative in 1982 to VP of Sales in 1985.

“I remember getting crushed in a pitch meeting with Don Valentine from Sequoia Capital when I was 25. It was probably the best thing that happened to me,” Michele said.

By 34, AB was serving as Chief Revenue Officer at Verity, which went public in 1995. She became President of Verity at 40 and CEO at 43 before selling the company for $140M and transitioning to lead the integration team for seven months post-acquisition.

She then returned to university alongside her triplet daughters, finishing the degree she paused 30 years prior to focus on her career. Refreshed and degree in hand, she returned to the executive realm, serving as Integrator & Chief at Autonomy (integrating two acquired companies—ZANTAZ and Interwoven); CEO of Coverity (growing their revenue from $25M to $90M in just over 3 years before selling the company for $400M); and CEO of Imperva (scaling revenues from $110M to $300M in 3 years and remaining on the board for an additional four years as their market cap reached $1.6B).

Michele was recruited for her first board seat at Proofpoint in 2010, where she served for almost 6 years as the company grew from $100M to $300M in revenues and a $4B market cap.

Integrating with the Athena community

When Michele made the decision to confirm her gender identity, she thought her career was over.

“My departure from Imperva was not pretty because I was transitioning. I would never suggest any public company director or executive go through that,” Michele said. “I had been in the Valley long enough and heard enough unkind things said about people behind their backs, I thought my career was over. In a board meeting, I even had someone say to me ‘You’re not turning gay on us, are you, Anthony?’”

In early 2020, Carol McKinlay (Coverity’s then-head of HR) invited Michele to sit in on a recruiting conference panel with Coco and Athena member Kathy Zwickert.

“I was terrified. We were on a panel in front of 1,400 people at a recruiting conference, and it was the first time I was out publicly as a transwoman,” Michele said.

She was met with a warm welcome and an invitation to join Athena as a member.

“I was so grateful, and am still so grateful, for how welcoming Coco and Athena were,” Michele said. “When I first joined, I didn’t realize the value of community. I was an army of one for most of my life. I was the CEO who was trying to keep a big secret that would wreck everything about my life. The support and community at Athena were powerful. It is so lovely to have the support of your peers—women who have great questions, who are sensitive and vulnerable. It’s hard to describe, but it’s life-altering.”

“I love the Salons. 40-50 women would be in the room asking fabulous questions, and afterward, I would get 5-6 pings from people wanting to chat about board seats, the CEO journey, and more,” Michele said. “I think I gain more value from those conversations than I give.”

Michele was bought into Athena’s community and approach to developing women leaders. When the opportunity to sponsor underrepresented women’s membership arose, Michele and Karen (her wife of 29 years) jumped at the chance. They later invested in Athena’s seed round in November 2020.

When Coco asked if Michele would join the board and lend her executive expertise at a new level, it was a clear “yes”.

“I didn’t even give it a second thought. There’s a lot of great opportunities at Athena to elevate women into C-suite positions, prep them, get them muscle memory, and elevate them to board roles,” Michele said. “I’m excited to share my experience and insights in this new capacity.”

Athena Alliance is the top community for executive career advancement, where the top women leaders learn, connect, and grow their careers. Learn more about membership here.